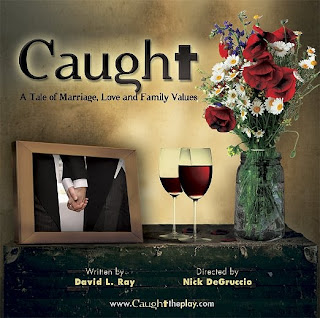 Reviewed by Andrew Holinsky for “The Alternative” “Caught”, written by David L. Ray and directed by Nick DeGruccio, is a MUST SEE for everyone gay or straight. The play opens on a Sunday in July of 2008 in Los Angeles as Kenneth, superbly played by Mackenzie Astin, and his boyfriend Troy, played by understudy Derek Daniels Meeker, are finalizing their wedding plans for the following Saturday. Kenneth’s sister Darlene, a Preacher’s wife, and niece Krystal show up unexpectedly from Georgia at their home. Kenneth has not told her of his upcoming wedding nor about his relationship with Troy. This causes tension between Troy and Kenneth. Kenneth finally shares the truth with the disapproving, pious Darlene. Further during their conversation Darlene reveals she caught her husband J.P. cheating on her with another woman. The first act ends with J.P. heading to LA to find his estranged wife and daughter. Micah McCain as Splenda and Amanda Kaschak as Krystal nearly steal the show with their performances. Deborah Puette’s portrayal of Darlene was perfect as was Richard Jenik as J.P. The chemistry between Mackenzie Astin and Derek Daniels Meeker and between Mackenzie and Deborah Puette was convincing and electrifying. The stucco set by Adam Flemming was also outstanding and authentic. “Caught” is currently playing thru Sunday, May 15th at the Zephyr Theatre, 7456 Melrose Ave. Los Angeles. 90046. For ticket information call 310-945-5786. You can also go online at Caughttheplay.com for more information.
Posted by Terry LeGrand at 10:51 AM